Synthesis of Protoporphyrin-Lipids and their Liposome Formation

Photodynamic therapy (PDT) is a tumor treatment modality that uses a combination of photosensitizer, oxygen, and tissue-penetrating light. Reactive oxygen species (ROS) generated from molecular oxygen through energy transfer of the photosensitizer induce significant oxidative damage to biomolecules, and cell death occurred as a result (Figure 1). The selective accumulation of the photosensitizer in tissue and the subsequent light-irradiation dose applied to the target tissue are important issues for the successful application of PDT. Various classes of photosensitizers have been designed and synthesized so far, including porphyrins, phthalocyanines, chlorins, and non-porphyrin dyes. However, most photosensitizers tend to be poor soluble in water. Therefore, much attention has been focused on drug-delivery vehicles as nanoscale drug-delivery platforms, such as liposomes. 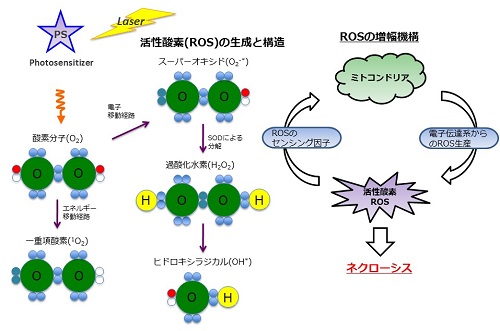 We are interested in the development of a water-soluble PPIX. To this end, we focused on the structure of PPIX and designed PPIX lipid (PL-C17) by introducing a long alkyl chain to each vinyl group on PPIX via hydrobromination, in hopes that PL-C17 would form micelles in water. We developed an alternative strategy for the liposomal delivery of photosensitizers, which involved the post-insertion of PL-C17 into liposomal bilayer (Figure 2) 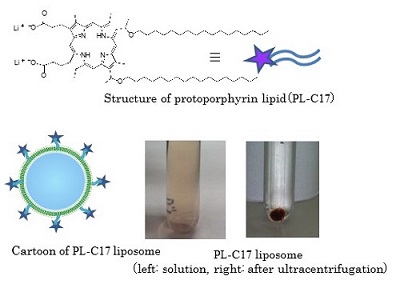 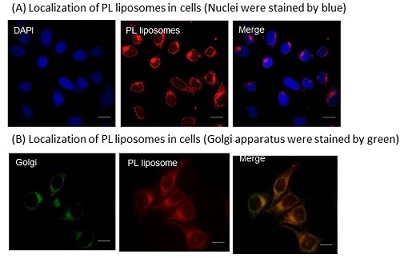